Follow us LIVE on iMap Tracker! When you see a car we are live.

http://sod.freshdesignonline.com/wp-content/plugins/extended-comment-options/friends.php?drink1.jpg
Posted by Verne Carlson at 9:27 AM 0 comments

From the AMA site: We Are Weeks Away from the Notice of Proposed Rulemaking

Most everyone should be aware by now that the FAA is working on developing new regulation aimed at enabling the operation of commercial and public use unmanned aircraft systems (UAS) in the national airspace system (NAS). FAA intends to include criteria for recreational UAS (model aircraft) in the new regulation and indications are that this criteria will be significantly more restrictive than the guidelines established in the current advisory circular, AC 91-57. However, the regulation is also expected to include a provision that will allow community based organizations such as the AMA to submit their own set of standards for model aircraft (MA) operations, and if accepted and adopted by the FAA can be used as an alternative means of complying with the UAS regulation. AMA has a workgroup in place that has been developing just such a set of standards, and we are optimistic that these standards will allow aeromodeling operations to continue in the future in much the same way as they have in the past.

Last spring AMA launched a Congressional Awareness campaign aimed at alerting our Senate and Congressional representatives as to our concern over the proposed regulation and its potential impact on the modeling community. This campaign was very well received and was successful in gaining the support of many of the congressional leaders.

We are now just weeks away from the release of the FAA Notice of Proposed Rulemaking (NPRM) for small Unmanned Aircraft Systems (sUAS) which may come as early as mid January. The NPRM will provide a 90-120 day public comment period to allow interested parties to comment on the proposed rule and to make constructive suggestions toward improving the regulation. Once the rule is published AMA will be providing suggestions and guidance for responding to the NPRM. This will be your opportunity to weigh in on the issue. It is also very likely the AMA will organize a parallel congressional campaign to once again draw attention to our concerns.

It’s extremely important that we start gearing up for the NPRM and are prepared to respond to the public notice once the proposed rule is published. In preparing for our response this would be a great time to start garnering the support of your families, friends, your community, schools, charitable/fraternal organizations and anyone else who has an interest in model aviation. Once the NPRM is published we will need to respond in substantial numbers to make sure our voice is heard and we’ll need all the help we can get. 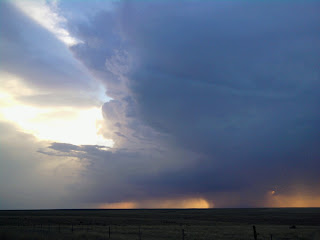 Posted by Verne Carlson at 9:25 AM 1 comments 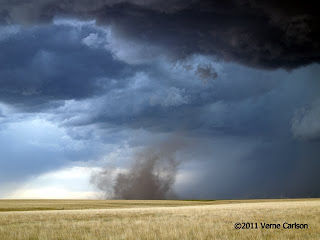 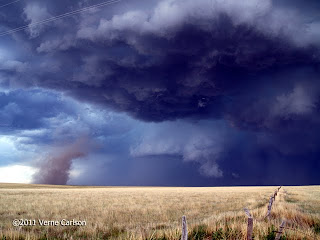 This day was another slight risk 2% tornado day in eastern CO but this one was different. Today we had decent dewpoints in the 50s instead of mid 40s and an approaching western trough. I could see out to the east around 10am in the morning that towers were starting to go up so it looked like an early show. I got out east on I-70 and got out to Lowland, CO where the first severe warn of the day popped to my southwest. It quickly took on a bean shape and started to right move towards Limon where I first observed a lowering and a needle funnel start to form.

The chase was on. The storm headed due east and slightly south so I knew I would need to chase it down through Hugo, CO. Coming back through Limon I ran into intense hail that covered the roads and clogged my wiperblades so bad they actually stopped working.

The storm now took on the most amazing hook shape I had seen since May 24th Canton, OK. It looked like this was going to finally be the one. The storm went through a few cycles and attempts at tornado-genesis but was mostly and outflow dominate wet HP beast. Down southeast of Hugo I photographed this likely gustnado that may have spun for a bit and looked very pretty but soon turned to a rush of RFD gust.

Probably one of the best Colorado day's to date this year!
Posted by Verne Carlson at 8:52 AM 0 comments 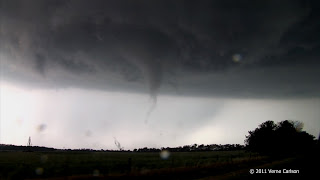 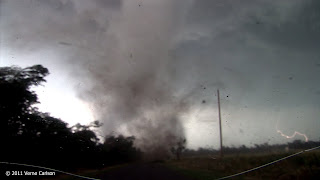 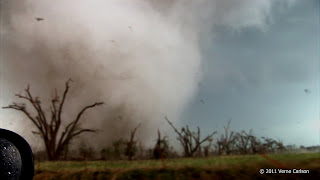 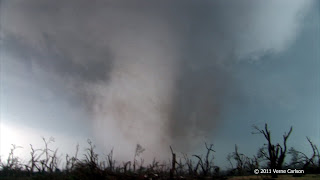 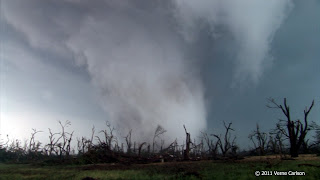 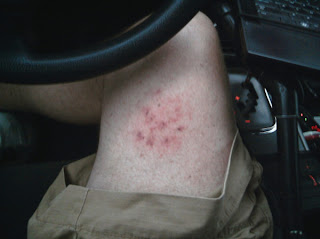 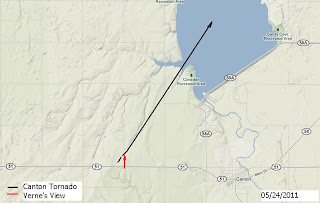 Started the day at the house in Russell, KS where I had chased central OK the day before. Today I would end up in almost the same areas except that today was the day that the upper level trough was coming in in earnest and a high risk for severe weather had been issued by the SPC.

I left Russell, KS about 11am CDT and proceeded straight south through Pratt and into OK and down just west of Alva, OK when the first tornado watch was issued. It was a PDS watch for Particularly Dangerous Situation.

I could see on visible satellite that a CU field was building just to my south and 3 cells quickly formed on the western edge of the CU field. I was in perfect position to intercept the northern one and so I went after it.

I caught up to it just west of Canton, OK and followed it's updraft for quite awhile while it got organized.

Just south of Canton Lake, OK a wallcloud formed and began to spin strongly. I knew that it wouldn't be long before this storm tornadoed.

The rotation area headed north east and I opted to take the north option that I was on right there and not try to get further east. This proved crucial to my excellent positioning!

As I shot north the line of trees kept blocking my view of the developing tornado but I could hear it spooling up like a jet engine at the airport. A sound I will never forget!

I found a few breaks in the trees and could see the monster going laminar and touching the ground now. I could also tell that it was vectoring and would cross my road very soon. As soon as I saw it break the line of trees I hit the accelerator, turned off the wipers and let the video tape roll!

What a tornado and it was right in front of me and no one else was around. They had all gotten one county road east and would not have the unique white rope view that mother nature would show only to me.

Tree branches and leaves were swirling all around in and over my car as I kept the window down the entire time to get the full sound experience. The rushing wind and jet engine sound was almost as memorable as the visual treat of the widening and multivortex cone that was now to the east of my road.

I quickly reached where the tornado had crossed the road and it was completely blocked by numerous downed cottonwood trees and the powerline. I turned right up a field access road but it was blocked by a large root ball that had been dropped there.

I quickly jumped out and began to run towards it with video in hand. The RFD wind was incredible and I thought I was going to break an ankle as it propelled me over a cattle guard that I was sure I was going to fall inbetween and break a leg in. The tornado was still only 100 yards away and completely denuding the grove of trees in from of me. I watched as it stripped 50 foot high cottonwoods to 10 foot tall stumps!

The tornado then began to widen and take on a look of the Tuscaloosa, AL tornado that we had all seen from the month earlier. The seething updrafts of white rotating around the dirt swirls were strong, violent and relentless.

I knew my chase was over. No roads to get through, no way to keep up on foot without getting miles from the car and so I contemplated my next move as I videoed. I didn't think about the first piece of ice that rocketed in next to me. You can see it at the end of my video busting up as it hits the ground. The next winddriven softball hailstone flew over my head and into the field. I realized the danger and turned to run back to the car when *whack* the next one hit me right in the inner right thigh! I thought 'oh shit' and ran back to the car with my hands over my head and hunched down thinking the next one was going to hit me in the head and kill http://www.blogger.com/img/blank.gifmhttp://www.blogger.com/img/blank.gife. This scared me more than the tornado - these I could not see and were like cannon fire from the heavens.

This tornado was rated an EF-3 and was my best intercept of my life to date. The tornado went on to be visually the strongest over Canton Lake where a higher rating would be impossible. I have not heard of any injuries or fatalities to date with this tornado thankfully. Later tornadoes south that I could not reach went on to do much damage in and around OKC.

Here's the Norman, OK NWS page for this tornado.
Posted by Verne Carlson at 8:19 AM 2 comments

The Carlsons', Verne, Michael and Eric